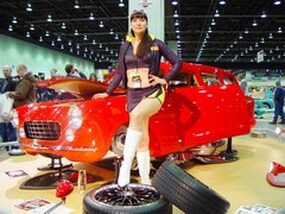 PIRELLI, CHIP FOOSE and CHAMPIONSHIP AUTOSHOWS TEAM UP to SUPPORT CAR CUSTOMIZERS at AUTORAMA Pirelli Presents Awards to the Great 8

DETROIT, MI – America’s Greatest Hot Rod Show thundered into the Cobo Center in Detroit this past weekend attracting over 120,000 visitors from all over The United States during the three day event. The 56th Annual Murray’s Autorama by Meguiar’s featured the best of the best in hot rods and custom cars – many in contention for the coveted Ridler Award. The annual award - named for Don Ridler - is presented each year at Cobo Hall during the Detroit Autorama to the most outstanding new custom car that will be exhibited at Autorama for the first time anywhere.

Since its inception in the 1960’s, the Ridler Award has continued to gain attention and respect over the years as the ultimate award recognizing the best of the best in the hot rod world.. The ceremony for the Great Eight has gained notoriety as well and is one of the most anticipated moments at Murray’s Detroit Autorama. This year, Pirelli Tire North America awarded each of the Great Eight with $1,000 in prize money as well as a custom jacket and award. “To be included among the Great Eight at Detroit Autorama is an honor that is sought by the top custom car designers, builders and owners in America. We are delighted to have the respected name of Pirelli associated with the naming of the Great Eight and we are looking forward to a continuing, strong relationship with the company,” said Bob Larivee, Jr., CEO of Championship Auto Shows, Inc. 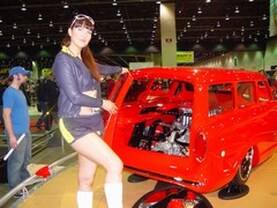 Foose’s first Ridler Award was in 2002 for his interpretation of a 1935 Chevrolet Master owned by Bob and Wes Rydell named “Grand Master”. The following year, Foose won the coveted award yet again with “Stallion”, a 1934 Mercury Monarch sedan belonging to Ron Whiteside. 2005 brought another Ridler to Foose Design with “Impression”, a 1936 Ford Roadster belonging to Ken Reister of Littleton, CA. “I have wanted to do something for fellow customizers to reward and inspire passion and creativity at Autorama for sometime. I am proud to represent Pirelli, they understand passion and performance and were willing to step up and get involved,” stated Foose. Pirelli is proud to begin its second year as the “official tire” of Foose Design and looks to its 130 plus years of heritage tire design excellence and over a century of motorsport victories as it becomes active in the hot rod and street rod markets.

“We are excited to be putting down roots in the street rod customizing field with Chip,” commented Rafael Navarro, Pirelli Tire North America’s Director of Public Relations, Advertising and Motorsports. “Combining Pirelli’s success both on the track and on the street with the creativity and excellence of design in the street rod and hot rod fields is going to allow customizers all over America to put their power to the ground like never
-more-

before. The incredible cars on display at the Detroit Autorama are representative of the heart and soul of American hot rodding, and Pirelli is there with a superior line of tires for hot rodders and street rodders specially manufactured to take advantage of the big power and big wheels these new rides demand. We look forward to growing our presence in this community as well as giving our customers additional reasons to get excited about our brand.”

The weekend was brought to a close by the announcement that Mike Warn’s “Ferrambo” was selected as the 2008 Ridler Award winner. Combining the heart and soul of a 2002 Ferrari Modena drive train with the body of a 1960 Rambler wagon, the vehicle was a site to behold in Ferrarri Corsa Red shod with Pirelli P Zero tires. A fitting ending for Pirelli’s debut as the presenting sponsor of the Great 8, Italian passion for performance and design has a place in American custom car culture.